If you were faced with an evil, illegal, unethical or highly questionable business practice sanctioned by your leaders, would you have the character to stand up and declare your disapproval, even if it meant losing your 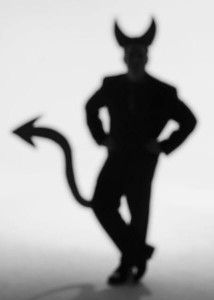 job?  Would you walk away from a steady paycheck if your company’s leaders were unwilling to correct their wayward practices? When the eyes of evil are upon you the act of conscientious separation can be a very, very difficult moment in your life.

This is our hope: when faced with evil, we will stand up for what is right, good and honorable.

The problem is that group behavior tends to create norms and patterns of behavior that tend to force people to conform in order to feel part of the team. That is why belonging to the right company culture is absolutely necessary for the mental, physical and spiritual well-being of employees over the long term. The people in power at your company – president, CEO, COO, CFO, CIO, CHRO, board of directors, etc. – have enormous control over the company’s cultural climate and group behavior.  Company culture flows down from the top.  It does not bubble up from the mail room or permeate the organization from human resources.  Company culture is a reflection of the leader’s personality.

The executive’s control of incentive payments changed her in a very disturbing and negative way. Sometimes soccer moms are not immune from morphing into whatever behavior pays the most money so the kids can have the latest brands, gadgets, technology and private education.

Consider the famous 1971 Stanford Prison Experiment. College students volunteered to play the role of either prisoner or prison guard.  The result: only after six days the planned two-week experiment had to be abruptly halted as the college students playing prison guards morphed into evil dictators who levied psychological abuse on their fellow students playing the role of prison inmate.

Many of the prisoners were found laying on the floor in fetal positions experiencing mental breakdowns as a result of the significant levels of psychological mistreatment.  Can you imagine what would have happened if the experiment continued for two weeks?

According to psychology professor and leader of the now famous experiment, Dr. Philip Zimbardo, said, “the planned two-week study was terminated after only six days because it was out of control. Good boys chosen for their normalcy were having emotional breakdowns as powerless prisoners,” Zimbardo stated. “Other young men chosen for their mental health and positive values eased into the character of sadistic guards inflicting suffering on their fellow students without moral compunction, said Zimbardo.

And those “good guards” who did not personally debase the prisoners failed to confront the worst of their comrades, allowing evil to ripen without challenge,” stated Dr. Zimbardo.

Professor Zimbardo underestimated the corruptive power of unbridled authority. Lord Acton once said, “Power tends to corrupt; absolute power corrupts absolutely.”  Professor Zimbardo stated, “My guards repeatedly stripped their prisoners naked, hooded them, chained them, denied them food or bedding privileges, put them into solitary confinement, and made them clean toilet bowls with their bare hands.”

There are leaders who will not allow others to question their authority. They believe they can treat employees how they want – good and bad – without repercussions because they sign their paychecks.

You may be thinking the Stanford Prison Experiment is in no way related to building a Great Workplace. Ridding the organization of tyrants, jerks, bullies and people with evil intent is merely a good start.  Most importantly, Great Workplaces are dependent on leaders with high levels of integrity, trust and respect, especially when times get tough.

We must also be careful how much absolute power we give our leaders.  Lord Acton observed that a person’s sense of morality lessens as his or her power increases. I have seen this scenario come to fruition as business associates became the beneficiaries of enormous financial success.  Sadly, they did not know how to manage the pressures of wealth, power and authority.  Unbridled power can destroy the person and bring the company down along with the toxic executive.

Top executives need someone who can speak to them without fear of being fired. This senior adviser should be able to speak freely with the CEO, even regarding issues that are unpopular or taboo.  CEO’s who are smart will hire a senior advisor who is paid to provide open, honest feedback – even if it hurts. Decisions made by CEO’s in isolation in their executive suite have the potential to cause enormous employee morale issues and severely damage the company’s public image.

As the prison guards began to fully assume their role as sadistic rulers, they began to wear reflective sunglasses 24/7. The inability to peer into the eyes of your tormentor was a way for fellow students to distance themselves from their prisoners whom they were severely mistreating.

In the event your company’s leadership begins to distance themselves from employees and peers, be prepared for upcoming decisions that could negatively impact the entire workforce.  Looking straight into the eyes of your leader can be very revealing.  The eyes can be a window into their heart.  Are your leaders in hiding?  Are they creating distance between themselves and employees? The act of creating distance may be an advance warning of impending trouble.

Most people do not determine in their hearts to turn evil.  It is a process of compromise over the course of time.  They surround themselves with people who are more interested in the benefits of group acceptance and membership rather than pointing out problems and issues with their leader’s decisions and actions.  The “how” things get done become unimportant just as long as the work gets done. Before you know it, the leader has succumbed to evil.