It’s Not Over When You Start Over

It’s Not Over When You Start Over

It’s Not Over When You Start Over
Posted by Kevin Kennemer in Business Ethics, Career
0 Comments

Starting over. This is where I find myself.

Starting over was not my plan. At the age of 50 my plan was to be winding down the intensity of my workplace activities and looking for a seaside home/office to live and work during the winter, and, if I got lucky, a Rocky Mountain home/office retreat to live and work during the 100 degree summer temperatures back home in Tulsa, Oklahoma. I envisioned the fun of spending time with Anita each day and our daughters and sons-in-laws as they came to visit us in paradise.

My plan changed in December 2007

Losing what I considered the best HR position in the region, after achieving much success I walked to my car in the office’s parking lot for the last time that cool December morning in disbelief I had been defeated by the bad guy.

Eight months later that company filed for bankruptcy and while I was blessed not to be involved in that process, the financial cost to me, and many of my friends, was overwhelming. It was like a big kick in the gut where you double-over in pain, unable to breathe. I tried to help many of my friends find new jobs.

It was time to start over

Starting over is hard for a man. I had placed a great deal of trust in my ability to earn a substantial income for my family and live comfortably. We married at 20 and were mere kids working for little money while I finished my degree. But we were madly in love.  In the final analysis, money should not be our life’s goal. Living, enjoying family, helping others, enjoying God’s great creation; this is the proper perspective on life.

We are not alone

Many American workers are starting over due to company bankruptcies, layoffs, and broken promises. College graduates are carrying record debt loads, and have difficulty finding work after graduation. The economy is about the worst it has been since the depression era.

Living during the Great Recession has brought massive unemployment, extensive losses in retirement funds, a record number of home foreclosures, executive fraud at the highest levels while brave whistleblowers continue to lose their jobs due to unchecked power and greed. On a positive note, driven people are starting new businesses, becoming their own boss and carving out their own niche in life.

People who care for their fellow-man

People who truly care for others, and place other’s interests above their own, typically are most susceptible to financial hard times while in Corporate America. In the short-run, nice people may fall at the hands of hardened business people. In the long run, caring, nice people will inherit the earth. For now, it is the caring, nice people who are thrown out on the street. I am looking forward to Act II. 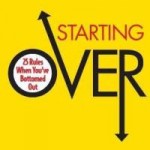 Buy the book, “Starting Over: 25 Rules When You’ve Bottomed Out” by Mary Lee Gannon at Amazon.com