On July 4th, a neighbor’s car caught fire in their driveway and flames quickly spread to the garage, and eventually the house. The beautiful two-story home was engulfed with fire and the flames were leaping high into the sky. 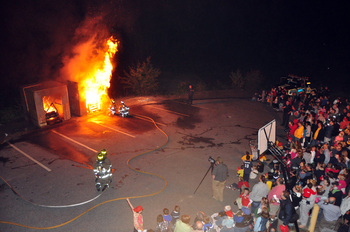 Companies with a toxic culture, like house fires, attracts crowds who watch it burn down.

On that clear, warm summer night around 11:00 pm, half the neighborhood, plus a few strange folks who simply follow firetrucks, converged at a distance and watched as the fire raged while several firefighters performed their courageous work in 90 plus degree weather.

Thankfully, nobody was home at the time and the family dog was safely retrieved from the backyard.

Have you ever noticed people like to watch fires?

People also like to watch relationship meltdowns between friends, family and coworkers. If you have watched any tv series, there are a great number of reality programs that take cameras inside dysfunctional families where they fight, yell, scream, curse, cheat, spend lots of money, plus all manner of activities that attracts viewers, and evidently deep pocket advertisers.

A great workplace will not draw viewers like a fire or dysfunctional family, but it will attract great employees who build successful companies.

In a sense, Undercover Boss, is a reality television program where the CEO goes undercover to see the realities of their company’s workplace with cameras rolling.  Usually the executive is overwhelmed by the disparity between workplace expectations and reality.

The CEO may find employees who are extraordinarily dedicated despite they are not provided the proper tools or training to perform.  The show has highlighted several employees who remain dedicated while managing overwhelmingly difficult family situations.

Let’s imagine a camera was brought into your workplace, would there be dysfunction that would draw viewers and advertisers? Or would your workplace be a functional family where people play nice, treat each other with respect and generally feel good about their work family?