Ageism and Best Places to Work

Ageism and Best Places to Work

“Hear the one about the unemployed middle-aged guy who tripped and fell into the new economy?”

It sucks being a middle-aged worker.

Of all organizations in the U.S., award-winning best places to work should not discriminate against minorities, including middle-aged workers. Otherwise, their workplace is not truly a great place to work worthy of recognition.

This article focuses on a real scenario involving the discrimination against a middle-aged candidate for employment, which is illegal in accordance with the Age Discrimination in Employment Act (ADEA).

A hiring manager is presented three exceptionally qualified candidates, including one Millennial and two middle-aged Baby Boomers. Further, the manager communicates to the recruiter she prefers a younger, Millennial candidate. A middle-aged candidate is just too old and won’t fit in their company.

This bias is illegal, but rarely is it provable.

An overtly biased action can lead to a potential age discrimination claim with the Equal Employment Opportunity Commission (EEOC) in accordance with the Age Discrimination Employment Act (ADEA).

Age discrimination is illegal for employees and candidates 40 and older. However, ageism is a common occurrence in today’s employment landscape.

Age discrimination accounted for 21.8% of the 84,254 claims in 2017 (see chart below). The actual numbers are likely much higher, but the problem is that it is hard to prove unless an employer’s bias is overt. 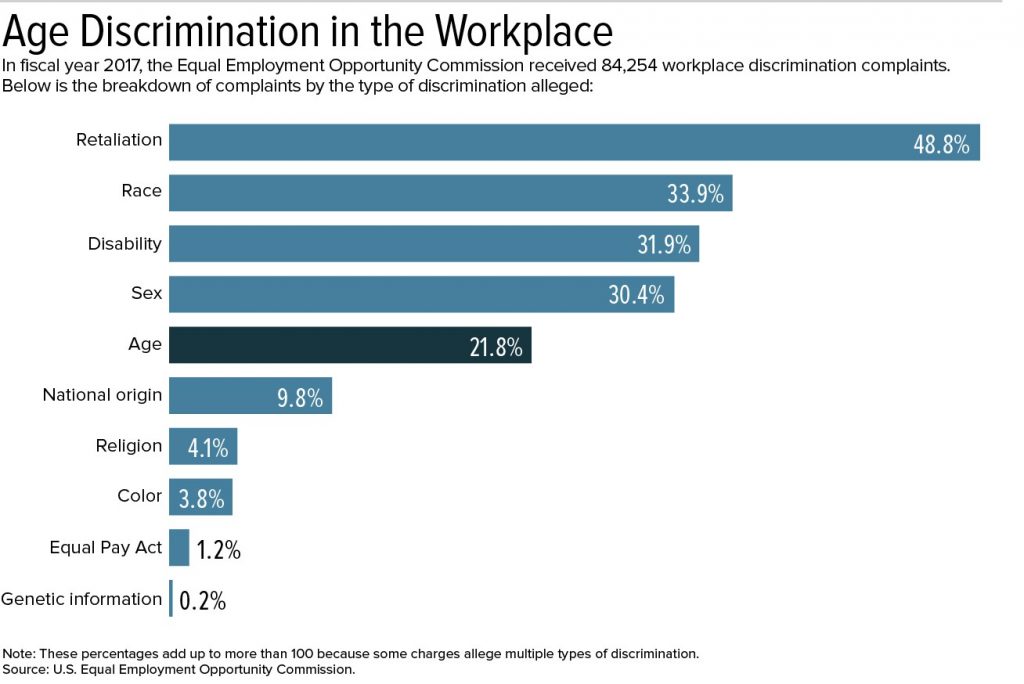 The Perceptions of Millennials vs. Boomers

Ageism: The Stealthy Version of Discrimination

It’s no fun getting old in the new economy.

Although I am going to cover the issues with interviews and job offers in a minute, it’s important to understand the dichotomy of Millennials and Baby Boomers.

I appreciate Millennials. We raised three of them, Brittany, Elizabeth and Katherine. There are some Boomers who complain about Millennials, but they have a lot to offer in today’s workplace and society.

Boomers shouldn’t complain about certain traits of Millennials. Why? Boomers raised them. It’s the Boomer’s fault.

The Beauty of Youth

Today, organizations are enamored with youth and dismissive of workers over 40. The economy has changed significantly, very significantly, since Boomers entered the job market in the 1970’s and 1980’s.

Make no mistake, not everything is wonderful for Millennials. That is a different topic for another time.

The Ugliness of Middle-Age

When Boomers started their careers, bosses valued experience. When they graduated from college, they didn’t have any experience.

In today’s job market where Millennials are making hiring decisions, a large percentage of bosses don’t want experience.  Even Boomers will discriminate against Boomers. They want inexpensive talent. What’s interesting, however, is they will save money on compensation packages but spend unbelievable amounts of money on great perks.  This is especially true of tech companies.

Another issue Baby Boomers experienced was pension plans were replaced by 401(k) plans. It was a rude awakening, because it was not unusual for their parents, The Greatest Generation, to spend most of their working years with one employer.  That’s right, one employer.

At the end of their career, the parents of Boomers received a gold watch, a pension check each month, along with health care benefits.

Then, during the 1980s, employers decided to shift the entire burden of retirement planning and funding to the employee. Employers transferred their financial risk to employees. This business decision was implemented to appease investors who didn’t like unfunded future liabilities on their financial statements. There were other fully funded pension plans and those were targets of corporate raiders who acquired companies and pilfered those significant retirement funds.

Now you know the potential mindset of those Boomers in today’s marketplace.

Retirement is Being Pushed Back

Because of advances in health care, people are living longer. Retirement is being pushed back because those 401(k) plans may not be big enough to retire.

In fact, there is a major retirement crisis coming to America because Boomers have not saved enough money.

The Ugly Truth of Ageism

Since you know some of the history, let’s talk about the pervasive existence of ageism in the job market.

Here’s the scenario. A job opportunity hits the market and candidates apply. Assume they are utilizing the services of a recruiter. The recruiter has a lineup of great candidates with a mix of Millennials and Boomers.

The Boomer possesses the specific experience needed, if not more than the required qualifications. The Boomer also provides the benefits of learning from crucial life lessons. Both successes and failures have taught them how to navigate through several business issues.

Millennials, on the other hand, likely possess much less experience, but they deliver a better first impression. Typically, they have more energy, are digital natives, willing to learn new skills, and far less expensive. Plus, their clothing is up-to-date, with more hair (for men) and less wrinkles (for women).

If you wonder whether a company discriminates against middle-aged workers, look at the pictures on their website’s career page. Are the workers in the picture all young? Or is there a mixture of all races and age groups. That might answer the question.

Ageism is Illegal but Common

Ageism is acceptable in a large percentage of organizations. For some, it is overt and for others it’s a result of unconscious bias.

Ageism can also happen in the reverse. Hiring managers might overtly express their preference for older workers. That bias is not illegal but unethical.